The COVID-19 crisis has had and continues to have both direct and indirect implications for the climate crisis. The pandemic has shown that drastic changes in response to large threats are possible. These changes had both significant direct effects on greenhouse gas emissions and gave rise to cautious hope that behavioural changes similar in scale would be possible to address the climate crisis.

The reduction in CO2 emissions after many countries had imposed restrictions to curb the spread of COVID-19 is astounding, especially in the transport sector. However, total emissions have slowly returned to pre-pandemic levels, and despite the large initial reductions, CO2 emissions in 2020 were estimated to be only 6.4 percent below emissions in 2019. To achieve the 1.5°C target set in the 2015 Paris agreement, annual emissions need to be cut by 7.6 percent each year during this decade, showing what a monumental task this is.

To get on a net zero pathway without massive drops in economic activity requires a mix of policy instruments and technological change but fiscal policy will undoubtedly play a major role. The COVID-19 pandemic required an enormous fiscal response to keep businesses alive, secure people’s jobs, and stimulate long-run growth to steer the economy out of recession.

In our recent working paper “The Covid-19 Crisis and the Road to Recovery: Green or Brown”, we analysed the fiscal spending of 85 countries (24 high-income and 61 emerging market and developing economies) in terms of their likely impact on greenhouse gas emissions and the implications for a green transition. In other words, have their spending policies been more brown or green?

To assess how green or brown a policy is, we have created an ordinal classification based on the policy’s likely effect on greenhouse gas emissions in both the short and long run.

The category of legacy spending refers to spending that was used to keep economic activity alive that would have otherwise stopped, such as liquidity support for businesses, VAT tax reductions, and general wage subsidies.

Our analysis is based on data from the Global Recovery Observatory, which tracks governments’ fiscal policy responses to the COVID-19 crisis. Up until May 2021, the total tracked spending amounts to US$19.8 trillion, including announced spending of EUR€2.02 trillion by the EU. The EU has designated 30% of this spending for fighting climate change but recent discussions about labelling investments in natural gas as green undermine its credibility.

Did policymakers seize the opportunity to “bend two curves with one recovery”, i.e. stimulate economic recovery from the COVID-19 pandemic and at the same time support the transition to a green economy through green long-term investments?

Unfortunately, the fiscal policy data suggests that this opportunity was missed. Green fiscal spending of almost US$400 billion is a strong step in the right direction but it is counteracted by an even larger amount of US$414 billion of brown spending. 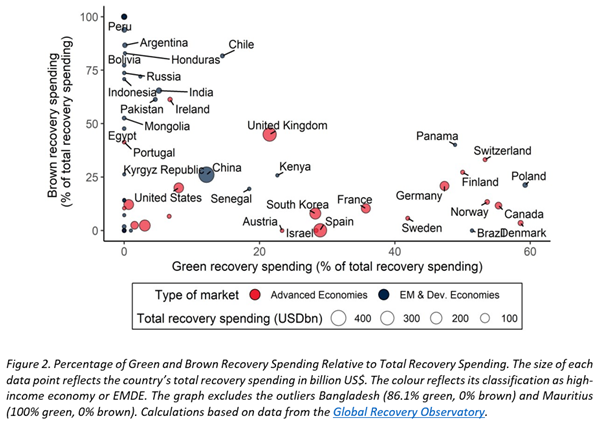 This is not driven by two different groups of countries, one with mostly green and one with mostly brown recovery spending. Instead, most countries have simultaneously taken substantial green and brown recovery measures. What lies behind this decision? Have policymakers chosen brown policies because they believe they provide a greater economic return? Recent research suggests that there is no trade-off between an investment’s environmental impact and its economic multiplier – if anything, green investments seem to have higher employment and output multipliers.

When countries are assigned into clusters based on the similarity of their recovery spending patterns, there is no clear distinction between high income and low/middle income countries. What is clear is that better environmental performance pre-pandemic is associated with a higher share of green and neutral recovery spending. Green economies are getting greener, but brown economies are becoming browner. This trend can be seen particularly in the energy sector. Most investments in renewable energy capacity are concentrated among countries that are already leading the energy transition.

The energy sector is especially important for the green transition since it directly affects emissions and underlies most economic activity, so that investments in the energy sector have long-lasting effects. Energy demand declined during the beginning of the COVID-19 crisis but has recovered since, leading to an estimated overall decline in global energy demand of 6.2% in 2020, while electricity generation from renewable resources and investment in clean energy have increased.

However, energy from fossil fuels is still expected to rise. For example, China and India invested both in renewable and fossil fuel energy production to meet growing demand. The expected rise in coal use dwarfs that of renewables, and coal plant retirements in the US and Europe are more than offset by coal capacity additions in other parts of the world.

Some countries have gone so far as to implement policies to protect the fossil fuel sector during the COVID-19 crisis. Indonesia, the US, and Canada have all adopted policy measures that benefit the fossil fuel sector, with Indonesia even reversing their plan to reduce reliance on coal power and instead offering incentives for the coal industry.

So is the world using the COVID-19 crisis to “build back better”? The evidence thus far suggests that the opportunity is being lost. While countries have invested substantial amounts into a green transition, they have equally invested in a fossil fuel-based economy in spite of the research showing that green policies are not inferior in terms of their economic stimulus effect and might even exceed those of traditional investments, making a more targeted policy approach in favour of green spending highly desirable.

The various forms of lockdown measures and their associated fall in emissions, but also economic activity, have shown how difficult it is to achieve substantial reductions in greenhouse gas emissions. While the threat from COVID-19 might have been more immediate and more visible for many people, it is high time we finally also took action against the climate crisis to achieve net-zero emissions and to allow for sustainable growth in the future.