International negotiations on a new climate treaty seemed stuck throughout the 2000s and early 2010s until negotiators agreed to the Paris Agreement on Climate Change in 2015. One of the major innovations in the Paris Agreement that enabled a breakthrough was the adoption of a new way of setting countries’ greenhouse gas mitigation targets. Under the Kyoto Protocol, states negotiated at the United Nations climate conference over what each country’s target would be and then negotiators took their agreed target back to national parliaments to be approved domestically. In a particularly prominent case, the United States Senate refused to ratify the target that the Clinton Administration had negotiated for the United States leading the United States to not join the Kyoto Protocol—at the time, the most important treaty for managing climate change.

In Paris, negotiators flipped the script. Instead of setting targets through inter-state negotiations, each country’s government deliberated domestically and then put forward their own target. The trick with this design is to encourage countries to set targets that fully express their maximum ambition in mitigating and adapting to climate change—no shirking! If negotiators were satisfied that the targets were ambitious enough, then the Paris Agreement would be adopted. Previous research from before Paris has shown that the collective ambition of these targets is not enough to prevent 1.5C of warming—we’re on track for more like 3.5C—but the Paris Agreement was adopted anyway.

Ultimately, the success of the Paris Agreement and future climate treaties will depend on some amount of reciprocity—a belief that different countries are contributing their fair share. One of the bedrocks of reciprocity is transparency—the ability to see and evaluate what one’s counterparts have pledged to do and are doing. In many ways, the targets that countries set for themselves and that form the backbone of the Paris Agreement are not transparent, or at least they contain a number of tricks and pitfalls that make them hard to compare.

One of the clearest ways that national governments mask the extent of their ambition is by manipulating the reference points in their targets. Consider the cases of Canada and Russia—by no means climate leaders. The Canadian government announced its intention to cut Canadian GHG emissions by 25% by 2030, while the Russian government announced its intention to similarly cut Russian emissions by 25–30% in the same time period. However, even though these two targets may appear similar at face value, they mask actual contributions to mitigation since each country benchmarks their percentage cuts using a different historical reference point. Canada benchmarked its Paris GHG target to 2005 emissions levels, while Russia benchmarked its target to 1990 emissions levels. Any actual GHG mitigation depends on both the percentage reduction and the reference point that emissions are to be cut from.

Visualising each country’s emissions trajectory in the 1990–2015 period, at the end of which all countries submitted their intended nationally determined commitments (INDCs) ahead of the Paris climate conference, illustrates that both the Canadian and Russian governments’ choice of reference year exerts a strong influence on the percentage terms that their targets are expressed in. Specifically, the chosen reference years make the percentage reduction appear larger than alternative reference years, since national GHG emissions fluctuate throughout this period. If each country had selected the other’s reference year but still chosen to target the same absolute GHG emissions level in 2030 as in their original INDC, Canada’s headline percentage emissions reduction would be only 16.5% from 1990 levels and Russia’s would be an increase of 8.7–16.6% from 2005 levels. The choice of reference GHG emissions levels has enormous consequences for actual GHG emissions flows under the Paris Agreement and measuring each country’s contribution to mitigating climate change. 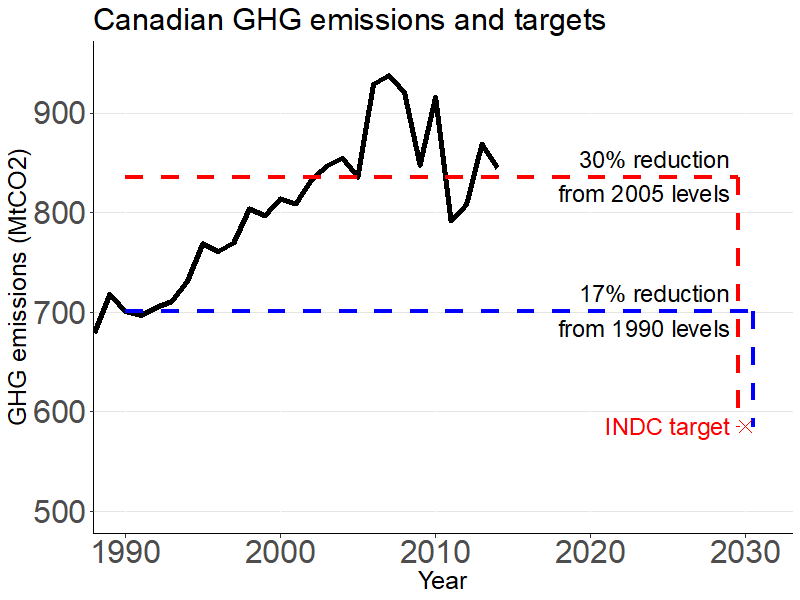 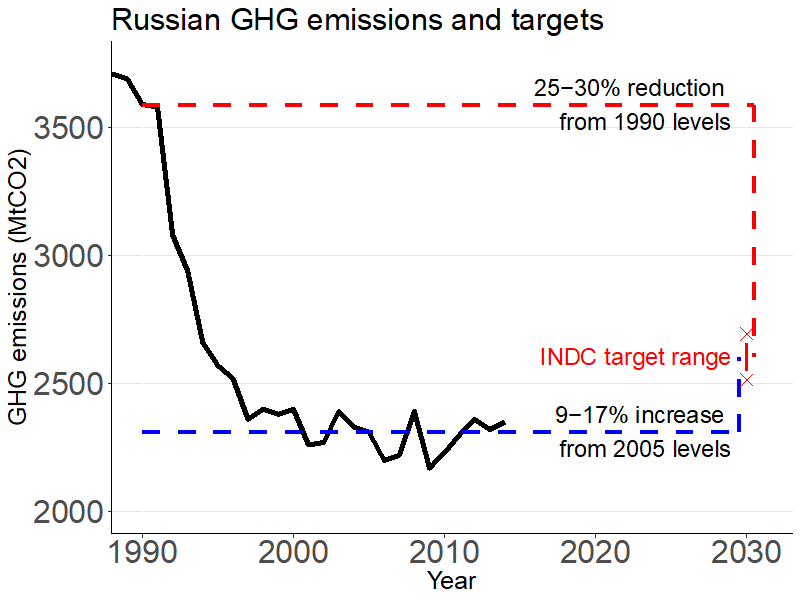 This point about measuring mitigation in INDCs would be purely semantic were it not already distorting climate research. Failing to account for the structure of the Paris targets led a study to conclude that countries with publics that are more aware of climate change adopted more stringent targets in the Paris Agreement than countries where domestic publics were less aware of climate change. Upon re-analysis, taking account of the structure of the targets, there appears to be no relationship between public opinion and the stringency of countries’ mitigation promises. Many studies do not report how they account for the structure of targets in developing their models, so the extent of this measurement problem in published research remains unclear.

Why might public opinion and the stringency of national emissions not be related in this statistical setup? One explanation could be that countries with more aware publics have not been able to mobilize their awareness to pressure political leaders. Powerful fossil fuel interests have long blocked national climate policies. It could also be the case that countries with more aware publics still haven’t prioritized climate change on domestic political agendas, compared to education, health care, or other topics. If this is the case, then perhaps the recent Extinction Rebellion protests in the UK, Greta Thunberg’s transnational school strikes, and the global push for a Green New Deal might be raising the profile of climate change enough for politicians to take action.