Human activity affects our climate while itself being affected by climate change. To what extent they impact one another can be more difficult to determine. For this, good estimates are needed, to ultimately help better guide climate policy. Climate econometrics may provide some of these insights.

It is a field that has emerged to meet this need – but it has experienced a split. One side focusses on how economic variables are affected by climate (taking climate as given). The other on how climate is affected by human activity (taking e.g. CO2 emissions as given). Each side makes assumptions about what the other side tackles (see Figure 1, left and right panels). 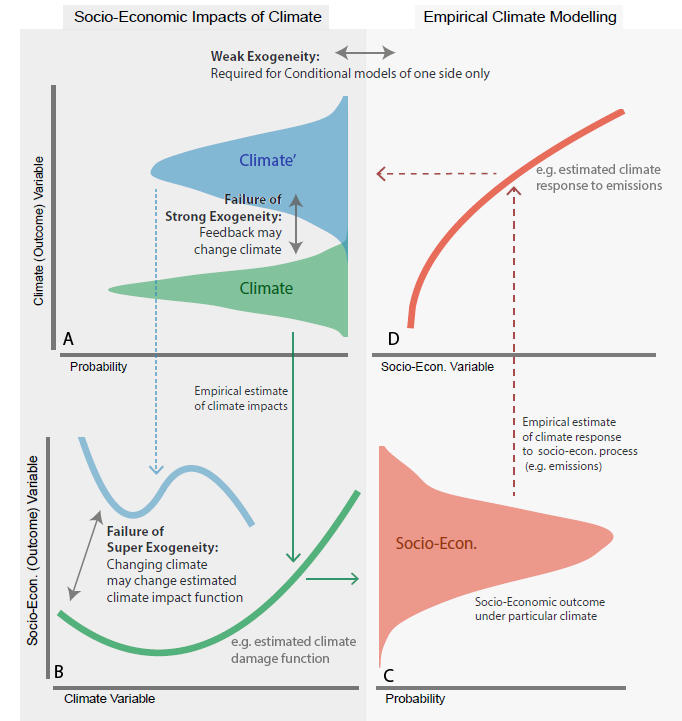 By definition both of these approaches cannot be correct at the same time.  Most likely, neither is entirely correct; economic and environmental systems are determined with feedback in both directions.

In his most recent paper “Exogeneity in Climate Econometrics”, Felix Pretis addresses this divide by presenting a simple climate-economic system[1] and discussing the conditions under which such a split may be problematic.

His answer to the problem lies in a concept referred to as “exogeneity” (discussed in detail in early work by Engle, Hendry, and Richard), and there are three types that should be considered in a model: weak (needed to make estimates in one of the sides alone), strong (necessary to ensure no feedback required for valid forecasting), and super (policy driving – does the relationship hold up against shocks). These need to be tested and hold true for the relationship between any economic and climate system to be validated.

By bringing these two sides together, the climate-economic system as a whole can be better understood, as opposed to focusing only on the impact one side has on the other. This could result in capturing effects that might not otherwise be picked up.

To make informed decisions, policymakers require a comprehensive understanding of how human activity affects climate and how climate affects human activity. Researching one side of this relationship will provide some answers, but a united climate-economic model will provide a more thorough explanation.