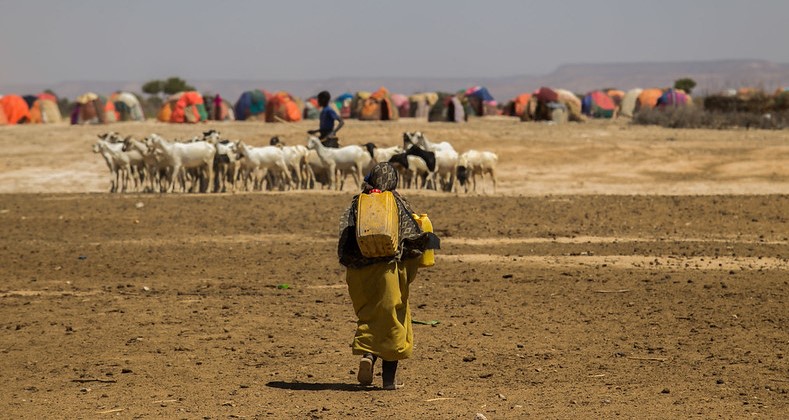 Situated in northeast Africa, Somalia endures both political and climate extremes. Violent groups like Al-Shabaab dominate parts of the country and it regularly experiences severe droughts. Understanding the effect of climate change on these already complex dynamics poses a significant challenge.

Lisa Thalheimer and Christian Webersik seek to disentangle these complexities in their chapter, “Climate change, conflicts and migration” in the book, Environmental Conflicts, Migration and Governance (January 2020).[1] Thalheimer and Webersik investigate the role of drought as exacerbated by climate change in security issues, political fragility, and armed conflict in Somalia.

Some studies of the potential impacts of climate change on conflict have found that increased temperatures or reduced rainfall can lead to armed conflict; however, this work challenges that view, arguing instead that armed conflict weakens the capacity of institutions and people to prepare and adapt to climate change.

When a climate shock occurs, it is security, as opposed to overall economic activity, which is of greater concern. The increased vulnerability to climate change caused by armed conflict is most evident in the risks posed by migration. For example, if a drought forces a community to travel further to collect food and water, this displacement in the context of ongoing conflict puts people at risk of entering areas that might be controlled by hostile clans. Conflict tied to competing claims over rights and renewable resources make adapting to the impacts of climate change through forced migration even more difficult in the already fragile territorial state.

This is problematic for a traditionally mobile population already experiencing severe poverty. For Somalia’s pastoral and farming communities, local conflict is destroying their ability to effectively cope with extreme weather by altering migration patterns.

Gaining access to resources is vital, and without effective management, growing clashes are likely, with the more vulnerable – such as pastoralists who must change migration patterns owing to climate shocks like droughts – being most at risk. Governance to address systemic risks must improve to efficiently manage natural and renewable resources. Strengthened formal recognition of water rights, access to pastureland, and land tenure present the most critical need for reform.

For a country like Somalia, where resources are limited and subject to extremes, the aim must be for governing bodies to put systems into place that can reduce conflict and benefit the whole of society. Where these bodies are weak and underfunded, the mobilisation of funds from non-state sectors, e.g. through remittances from Somali populations around the world, could be used to assist those areas most affected by disruptions from recurring or compound extreme events. Resolving underlying armed conflict presents a key step to reduce critical vulnerabilities to climate change – both to allow for improved resource management as well as secure migration as an adaptation strategy for pastoral communities.