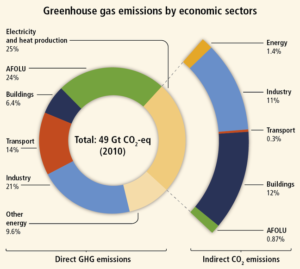 Trains, planes, cars and ships. They have all been blamed for the climate crisis, but most people don’t realise that the meat industry trumps them all, producing more emissions than all transport combined.[1]

While this revelation may not be enough to make everyone drop their burger and head for the tofu, increased awareness is causing many people to think twice about the link between climate change and what’s on their plate.

This social shift led Nuffield College’s Olivier Goddet to approach the Climate Econometrics group to discuss steps the kitchen and catering team could take to reduce its emissions. The team planned to transform its operations, from meals served through energy used in cooking and refrigeration.

The challenge they faced was daunting. How could a large organisation, like a university college, make a positive impact, while still catering for a range of dietary preferences?

One of the most straightforward but effective ways of changing behaviour is simply by altering the order in which food is presented. Research suggests that when given a choice, many people show a preference for the first thing they see.[2] When a vegetarian option is shown first, followed by fish, and lastly meat, selection of the vegetarian choice increases. In fact, the college has managed to cut its meat order by 34% since changing the presentation of meal options.

However, that strategy can only succeed when the vegetarian and vegan options are appealing enough, and that is where Nuffield really shines. The chefs have invested time and effort into creating a range of non-meat dishes that would tempt even the most loyal carnivores.

This diversification of the menus, along with cutting down on packaging, removing single-use cups, reducing standard portion sizes to minimize food waste, and working closely with suppliers to source more sustainable products, all comprise Nuffield’s commitment to reducing their overall emissions.

As always, more can be done, but the college’s model shows that emissions reductions needn’t come at the cost of an enjoyable culinary experience. Furthermore, even minor changes to a person’s diet can both help reduce emissions and lead to healthier meals.

For example, when someone classified as a “high meat-eater” (consuming over 100 g of meat per day) reduces their intake even a fraction to consume 50-99 g of meat per day, the classification for a “moderate meat-eater”, they would decrease their annual emissions by 569kg CO2 per year. [3] That’s about the equivalent of taking a round-trip flight from London to Iceland or driving 2,000 miles in an average petrol powered car.[4]

The initiatives at Nuffield are part of a growing trend within UK universities to try to reduce their carbon footprints. While one individual act might not save the world, a combined effort could make a considerable difference.